Cattle wormers are a very important of keeping cattle healthy and thriving, with pour-on and oral wormers being the most popular choice due to their effectiveness and ease of use.

Not all dewormers are created equal, though. There is broad-spectrum efficacy, time to act, slaughter time withdrawal, and suitability for use on lactating cattle all to consider.

Let’s take a look at three of the best options.

Best Oral Merck Safe-Guard's fenbendazole-based wormer is our top pick due to its fast-acting, broad-spectrum efficacy.

The Merck Safe-Guard Dewormer Suspension is our top pick due to its broad-spectrum efficacy and how it beats out other dewormers in a couple of important ways.

Compared to other cattle wormers, the Merck Safe-Guard Dewormer is unbeatable when it comes to just how fast-acting it is (one day vs. 7-14 days for competing dewormers). It has also proved to result in a 90% reduction in fecal egg counts, is easy to administer chute-side or in the pasture, and has been shown to increase weaning weight by 28.9 lbs per head

Containing the active ingredient fenbendazole in a liquid suspension, the Merck Safe-Guard Dewormer requires administration of 2.3 mL for each 100 lbs of body weight. As is standard, a withdrawal period has not been established in pre-ruminating calves, but slaughter withdrawal for cattle stands at 8 days. It is also safe for lactating dairy cattle with no milk withholding.

Best Pour-On Norbrook Noromectin Ivermectin Pour-On is a great choice if you are looking for an ivermectin-based dewormer for cattle.

The Norbrook Noromectin Ivermectin Pour-On strikes a good balance between effectiveness and price.

Unlike Merck’s dewormer, it contains ivermectin as its active ingredient to treat and control a wide range of internal and external parasites on beef and non-lactating dairy cattle One thing to keep in mind, though, is that a withdrawal time in milk has not been established, which means that it should not be used in female dairy cattle of breeding age.

The dose rate of Norbrook Noromectin is 1ml for each 22 lbs. of body weight. Horn flies can also be controlled for up to 28 days after dosing. Slaughter withdrawal stands at 42 days. 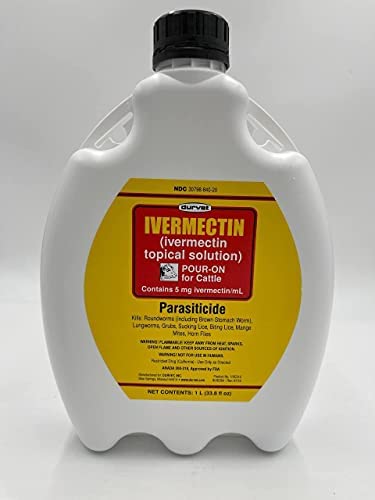 This includes gastrointestinal roundworms (including inhibited Ostertagia ostertagi), grubs, flies, sucking and biting lice, and sarcoptic mange mites in cattle. As ivermectin is the active ingredient, it also delivers up to 28 days of horn fly control.

Durvet Pour-On should be used at the rate of 1 ml per 22 lbs. body weight. It is not suitable for use in female dairy cattle of breeding age.

What to Consider When Buying Cattle Wormer

Oral dewormers strike a good balance between efficacy and ease of use, whereas pour-on wormers are arguably the easiest to administer but may not necessarily be as effective as oral suspensions.

Both ivermectin and fenbendazole are highly effective dewormers but they differ in a couple of important ways.

What makes fenbendazole unique and our preferred choice is how it is very safe for deworming due to the way it acts. An animal’s cells are not destroyed along with the parasite. It is also easily the best choice if withdrawl time is important.

However, it can often be a good idea to combine the two to get to those tough internal parasites and fight against resistance.

If you are looking for a wormer with the shortest withdrawal time to slaughter, there is only one winner: Merck Safe-Guard Dewormer Suspension.

This is due to using fenbendazole as its active ingredient, which is 5-6x shorter than ivermectin dewormers.

Ivermectin is not approved for use in lactating cattle. Not only can it result in milk dumps and loss of profit, but it can also cause FDA violations and fines.

Fenbendazole, on the other hand, is suitable for use in lactating cattle as long as it is not used in excessive amounts.

While it’s better to use a standalone product such as any of the ones we recommend in our best fly spray for cattle article to control flies, if you want a product that is effective against horn flies, in particular, choose an ivermectin-based cattle wormer.

Fenbendazole also has an effect but it is not as effective as ivermectin in this regard.

Can Cows See in the Dark?

What Do Cows Eat Other Than Grass?

Do Cows Have Hair or Fur?

How Long Does it Take to Milk a Cow?