Flies are much more than just a nuisance to cattle – and even more so to farmers and ranchers. Instead of grazing and gaining the weight that cattle could and should be gaining, they spend their time fighting flies instead. Flies and other pests can also transmit eye diseases, such as pinkeye and infectious bovine rhinotracheitis (IBR).

In short, every producer needs a way to keep flies in check to prevent economic losses that can often be substantial. The best way is to use a safe, highly effective fly spray for cattle. 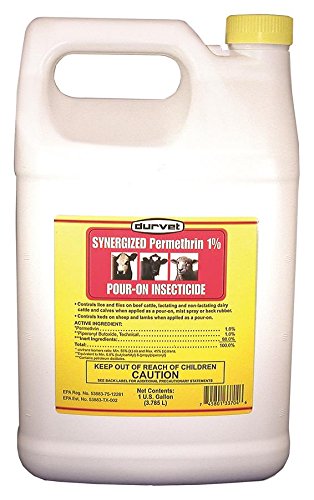 Best Overall Durvet is the biggest player in the pest control market - and their fly spray for cattle doesn't disappoint. It is the most effective fly control available.

Durvet has always been one of the biggest names in the pest control industry and has maintained an excellent reputation ever since the company first started. So as you would expect, the Durvet Fly Synergized Insecticide doesn’t disappoint.

The formula is made up of 1% permethrin and 1% piperonyl butoxide to effectively control fly, lice, and other pests on lactating and non-lactating dairy cattle, beef cattle, and calves.

As the insecticide is designed to be used undiluted if used in a spray, it is very easy to apply. Despite arguably being the most effective fly spray for cattle, Durvet Fly Synergized Insecticide is also one of the most inexpensive options too due to the company’s size and reach. 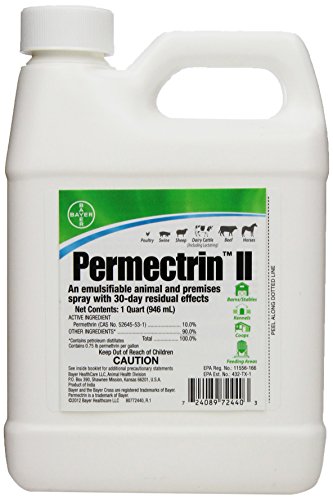 Runner-Up Bayer Permectrin II Insecticide is easy to mix, and simple and convenient to apply.

Bayer Permectrin II Insecticide uses a high percentage of permethrin at 10% as its active ingredient to control flies and other pests.

The formula, which is best described as an emulsifiable liquid, mixes easily and is simple and convenient to apply using either a low or high-pressure sprayer, whether that be a garden sprayer, hand sprayer, or any other type.

Bayer Permectrin II Insecticide can be used on all cattle, including lactating cattle. 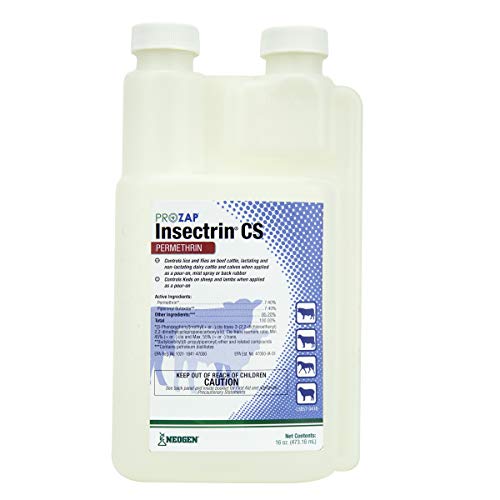 Specially designed for use on cattle, Chemtech Prozap Insectrin Fly Control provides effective control of flies, lice, mosquitoes, and ticks on both beef and dairy cattle, including lactating dairy cattle and calves too.

The oil-based formula contains and relies on the synergization of 7.4% permethrin and a relatively high amount of piperonyl butoxide at 7.4% to repel flies and other pests. Most other fly sprays for cattle rely on just a single ingredient and/or a low percentage of piperonyl butoxide. 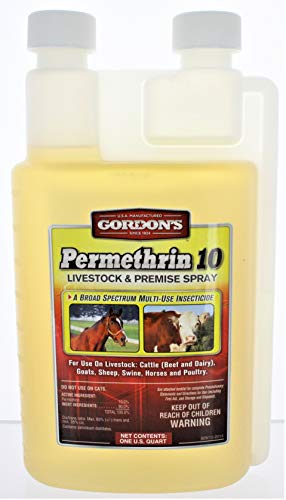 Considering that this Gordon’s spray is designed to be mixed at a 1:100 ratio, it is very economical too, though you can create your own strength for your own particular needs and preferences too.

What to Consider When Buying Fly Spray for Cattle

To keep the fly population in check, you will typically see fly spray for cattle containing either permethrin alone or permethrin in combination with piperonyl butoxide.

Piperonyl butoxide is not designed to harm insects on its own but has a synergistic effect when combined with permethrin to increase an insecticide’s effectiveness. In either case, both will get the job done. It just comes to preference.

If you’re looking for a hassle-free option as possible, it can be a good idea to purchase cattle fly spray that doesn’t first require diluting such as the Durvet Fly Synergized Insecticide.

If not, you can often save a bit of money by purchasing a spray that needs to be diluted.

Sprays are the best and most preferred option for stable fly control, but remember that regardless of which spray you buy, weekly applications are necessary. A low-pressure sprayer or a mist blower sprayer is also required for application too.

Can Cows See in the Dark?

What Do Cows Eat Other Than Grass?

Do Cows Have Hair or Fur?

How Long Does it Take to Milk a Cow?