There’s more to choosing a mineral block that will just attract deer.

The best ones should contain all the minerals necessary to support optimum antler development, body growth and condition, while also ensuring that it won’t melt in the rain, and deer will find it tasty enough to feed on and return on.

Here are 4 of the best, including the best overall option, as well as options with the highest protein content, with the most minerals, and the most balanced block too. 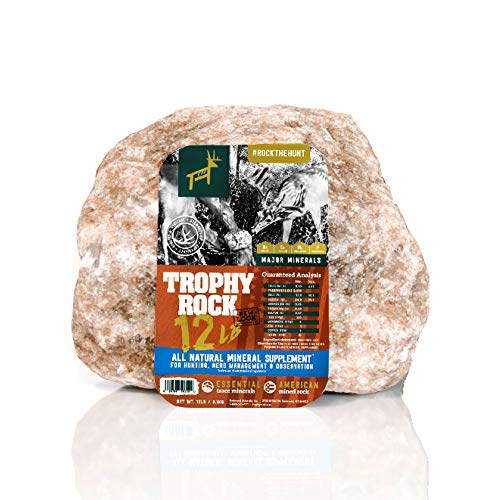 Trophy Rock All-Natural Mineral Lick is the go-to for many looking for a mineral block for deer – it just works.

Mined in Utah, USA, Trophy Rock Lick contains only natural instead of synthetic ingredients. It’s no surprise that deer love it, as they receive all important minerals as Mother Nature intended.

Trophy Rock has perfected the recipe, so not only will you see more deer than ever start appearing, but they will also return after the block is long gone to get every last ounce out of the ground.

While its salt content at 81% is higher than other mineral blocks, the lick contains more than 65 trace minerals including sodium, calcium, phosphorus and potassium that contribute and are beneficial to antler growth and overall herd health.

It is very long-lasting too, arguably more so than any other block on the market, delivering excellent value for money. You don’t have to worry about it dissolving or melting away either.

Monster Meal Protein Block – With the Most Protein 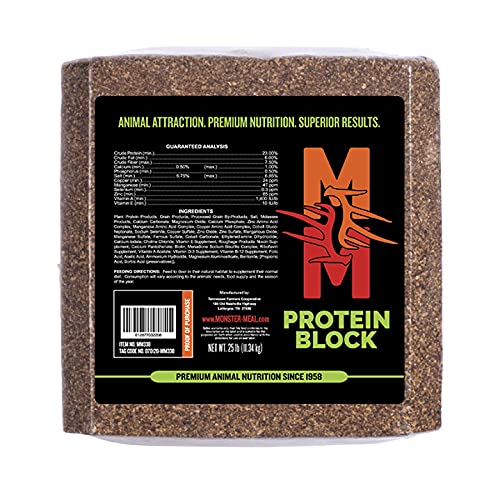 Monster Meal Protein Block contains all the minerals a deer needs, including calcium, phosphorus, selenium and zinc among others, but also a high level of protein (24%), and a low salt content (1.5%).

The importance of protein to a deer’s diet cannot be overstated, contributing to optimum antler development, body growth, and condition. If a deer isn’t getting an adequate amount of protein, it will be one unhealthy deer. So, it’s a good job that this block contains more protein than any other.

While not everyone looking to buy a deer mineral block will require such a high level of protein, if you are then the Monster Meal Protein Block is the one to get.

Himalayan Nature Mineral Block – With the Most Minerals 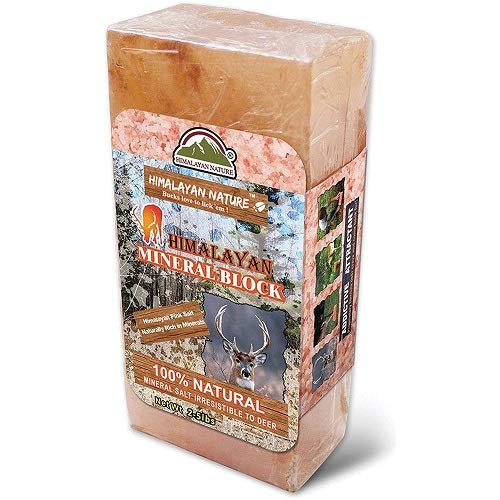 While Himalayan Nature Mineral Block does contain 100% salt, this is no run-of-the-mill salt block. The difference is that it is purely made up of salt from the 50-million-year-old Himalayan mountain range.

Himalayan Pink Salt contains more than 84 minerals, leaving no doubt that deer will get every single mineral they need from this lick.

Its unique composition, giving the salt its unique color that deer are sure to spot even if they somehow don’t smell it, also means that it is more durable, won’t melt or dissolve in the rain as easily, and will last a long time. 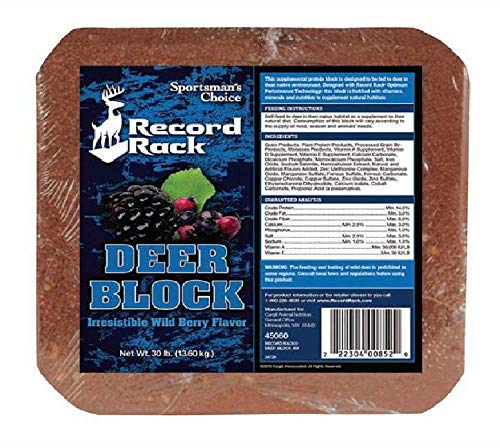 So, if you are more focused on mineral and protein content instead of salt, which doesn’t do a whole lot for deer health-wise anyway, look no further than this block from Sportsman.

With its wild berry flavor, expect this block to be gone in no time. One thing to keep in mind is that while it does a better job than most in the rain, you can still expect it to dissolve somewhat. it can’t compete with something like Trophy Rock on that front.

Important Factors to Consider When Buying Mineral Block for Deer

Some mineral blocks can contain as much as 60% salt while others contain very little – no more than 3-4%. One isn’t necessarily better than the other. It can depend on the seasons and how much you want to supplement deer diets with minerals.

In the spring and summer, for example, deer crave salt more due to water and other minerals being plentiful. In fall and winter though, they won’t crave salt as much.

Having said that, most people looking to buy deer minerals block will do so for their high percentage of mineral content, which is why most of our recommendations on this page are low in salt. Deer will also seek out minerals all year round while the same can’t be said of salt.

Deer grow best and are healthiest on a well-balanced diet that consists of more than just a couple of main minerals. Therefore, deer block containing many trace minerals is also recommended. After all, you will never quite know which minerals deer might be lacking the most in their habitat.

You don’t necessarily have to opt for something like Himalayan Nature Mineral Block that has in excess of 84 minerals, but trace minerals are a must.

Protein is an absolute must for deer. A deer’s diet must consist of 6-7% of crude protein just for survival. It’s only when protein reaches 16% that it is able to maximize antler growth, body condition, and size.

It might therefore be a good idea to buy a mineral block with a good amount of protein.

As mentioned, none come better than the Monster Meal Protein Block if protein content is one of your main concerns.

Any mineral block for deer you buy should have the correct calcium to phosphorus ratio. These two minerals are so important because studies have shown that they contribute to optimum antler and body growth. The recommended ratio ranges from 1:2 to 1:1.

We’ve made sure to recommend the best deer mineral licks that contain the right amounts.

What is the difference between mineral block and salt block for deer?

The main difference between the two is the salt content. Salt blocks, as you may have guessed, contain nothing but salt. Mineral licks for deer contain salt too, but this amount can vary quite significantly from just a few percent to over 75 percent.

What is the purpose of mineral block?

The purpose of mineral blocks is to ensure that deer get all the minerals they require in their diet, so the herd can become healthy. They also act as an attractant.

Pure salt blocks that have zero mineral content don’t do a whole lot for deer health-wise, but still have some health benefits, and are also useful as an attractant.

Deer won’t say no to either, but as just mentioned, they serve different purposes. Which one deer prefer can vary depending on the quality of the block itself.

A mineral block with a great scent and taste will keep deer coming back time and time again while also ensuring they are getting all the minerals they need in their diet.

Deer very much crave salt too. If you put it out they will find it.

Don’t think in terms of deer preferring one over the other; think about the purpose of the deer block. Do you purely need an attractant, or do you need a block that serves as an attractant and results in a healthier herd?

How and where should mineral blocks for deer be placed?

While deer will seek out mineral licks in remote locations, it’s better to place them in high traffic areas that are easy for them to get to such as on deer trails, funnels, or active edges, where two habitat types meet. These places are usually near a water sauce, and where deer can feel safe.

This means there should be easy escape routes near cover, and where they are unlikely to be disturbed by humans.

Mineral blocks for deer are best placed on a stump or another flat rock. Some people prefer placing the block in the ground though because the minerals soak into the soil and deer arguably find it easier to eat the soil/mineral than licking off a stump.

What minerals do deer need?

The results from the following study go some way in telling us which minerals deer need most.

A study at the University of Georgia found 11 different minerals in whitetails’ antlers. This included 19.01% of calcium, 10.13% of phosphorus, 1.09% of magnesium, and 0.5% of sodium. While these minerals are considered to be the most important, iron, potassium aluminum, zinc, barium, strontium, and manganese were also found.

Can you use mineral blocks designed for other animals?

While deer may be attracted to and lick these blocks, it’s always a better idea to opt for a block designed specifically for deer. Blocks designed for deer have the most important minerals in their correct amounts, and you’re likely to have better luck actually attracting deer to these in the first place.

While it’s often best to use a feeder for feed that comes in other forms, one of the best things about mineral blocks for deer is that no feeder is necessary. Some people may prefer to use one, though, because the block can be put at a height above the ground where deer instead of other animals can reach it.

How can you tell if deer are licking the block?

There are a few ways to tell.

You may be able to see tracks around the block, a camera pointed at the location will tell you if deer along with other animals are enjoying the block, and there will be lick marks.

The way to tell the difference between lick marks and rain disintegrating the block is that lick marks will leave grooves in the block. Rain tends to dimple the block and smooth the edges instead of the entire block.

How Tall Should A Deer Fence Be?

Can Deer Be Domesticated? (It’s a Bad Idea)

What Animals Eat Deer? (And How They Kill)

A Key to Bigger Antlers