Parasites, which include gastrointestinal worms, lungworms, coccidia, Cysticercus, tapeworms, and liver flukes, can cause major production losses in sheep flocks.

Fortunately, there are several over-the-counter and highly effective sheep dewormers on the market that can be bought and used to create an effective deworming program to ensure that production losses won’t be a concern. 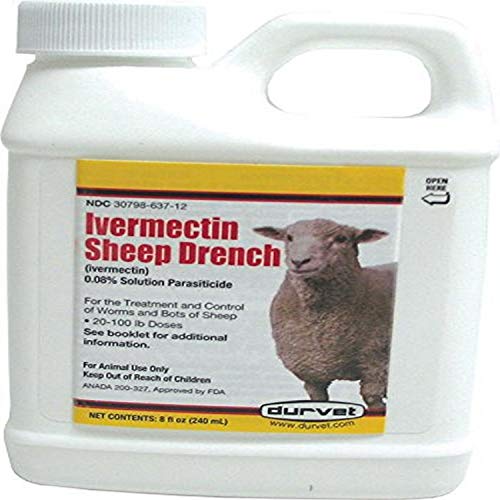 Durvet Ivermectin Sheep Drench is our top wormer for sheep due to its unmatched effectiveness and ease of use.

Each bottle contains an 8-ounce solution of ready-to-use, free-flowing ivermectin that is formulated to be as easy to administer as possible and deliver the recommended dose rate of 0.2 mg ivermectin per 1 kg body weight orally.

Durvet is arguably the biggest and most reputable name in the pest control industry, so it’s no surprise that the formulation is more effective than other ivermectin-based sheep dewormers.

Its broad-spectrum efficacy ensures that many gastrointestinal roundworms (including Haemonchus contortus), lungworms, and nasal bots are effectively treated and controlled.

Runner-Up Merck Safe-Guard's fenbendazole-based wormer is recommended for its fast-acting mechanism and efficacy.

Merck Safeguard Dewormer may be an off-label treatment, but it is still a popular choice due to its effectiveness, especially against both small and large pinworms, which it targets at all stages of their lifecycle.

Compared to other fenbendazole-based wormers, Merck Safeguard strikes an excellent balance between effectiveness, a fast-acting mechanism, and price.

Also Great Pyrantel Pamoate Suspension is a great alternative when drug-resistance is a concern.

Pyrantel Pamoate Suspension is another off-label treatment, and it shouldn’t necessarily be your first choice either. But as drug resistance can often occur, it’s good to have a bottle of Pyrantel Pamoate Oral Suspension as a backup.

What to Consider When Buying a Sheep Dewormer

Resistance is a very real concern when it comes to deworming sheep. While ivermectin-based wormers are the most popular choice, drug resistance in parasites of sheep is quite common.

So while fenbendazole and pyrantel pamoate solutions may be off-label, there’s a reason why they are popular with sheep farmers.

If meat withdrawl time is important to you, you might want to consider choosing a fenbendazole-based wormer, as they typically have a meat withdrawal time of 6 days.

Ivermectin-based sheep dewormers, on the other hand, typically have a meat withdrawal time of 11 days.

Oral dewormers are the best choice for deworming sheep because they strike a good balance between efficacy and ease of use.

Pour-on wormers may be the easiest to administer but are unlikely to be effective given the thick coats of sheep.

Injectable dewormers are highly effective but they are the hardest to administer, especially if you do not have prior experience.

Do Sheep Have Hooves?

How Often Should You Shear Sheep? (What Happens If You Don’t)

Can Goats Eat Acorns? (Poisoning is a concern)

Can Goats See in the Dark?